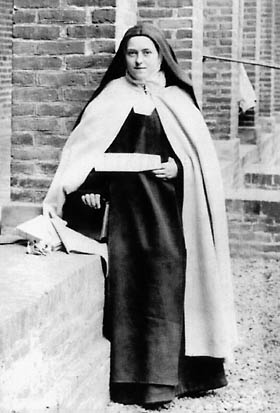 On October 5, 1999, Therese made her first visit to the United States. Arriving on an airplane, she came with an entourage to New York City. This was just the beginning of her four month tour of North America. She hadn't come from her home in Lisieux, France. She was en route from Buenos Aires. New York was only the first of over 115 stops across the country.

In life, Therese never left her cloistered Carmelite convent in Lisieux. In fact, the only thing of hers to leave her hometown was her memoir Story of a Soul, written under obedience and terminal illness during the final year of her life. She was only 24. Within a year of her death, the obscure work, written in the form of three distinct letters to her prioress, was published in an edition of two thousand copies. The nuns did not know what they were going to do with such a large inventory. A century later, Story of a Soul remains the most widely read Catholic writing of the modern era. Her teachings, known as "spiritual childhood" or the "little way" are widely hailed as a sure way to understand and reach Christ.

The commemorative card pictured above was distributed freely to those who came to venerate the remains of Saint Therese during her North American visit. Only one copy was allowed per pilgrim, and the item is a special memento to remind us of the path that Therese followed to us. Cloistered and virtually unknown during her lifetime, she had wanted to become a great missionary. Lacking in health, skill, and education, she was unable to realize her dreams in life. Nevertheless, she claimed she would achieve great sainthood by humbling herself like a child, and offering every word, thought, and deed to the love of Jesus. She was confident that He would repay her for her silent dedication to His will and desire to convert sinners through prayer and sacrifice. She was certain her reward would be to achieve great accomplishments for His glory after her death. On declaring her the 33rd Doctor of the Church, the youngest ever and only third woman to hold the title, Pope John Paul II said, "Her spiritual path is so mature and ardent, the intuitions of faith present in her writings are so vast and profound, as to have earned her a place among the great masters of the spirit."

The contents of a gilded wooden box covered with plexiglass, representing about half the remains of Saint Therese, had been travelling the world for about three years. The other half of her bones remained in France. Travelling from church to monastery, she would rest at the altar as countless thousands came to pass in front of her, touching or kissing the reliquary's cover. In St. Patrick's cathedral in New York, all–night vigils were held. At one such celebration in St. Thomas Aquinas church in Brooklyn, a crowd of worshippers stood in the street for several hours as the bishop's mass was broadcast over loudspeakers. Finally inside, the eager masses were able to pass single file by the reliquary in a line that continued for hours without break. Because of her popularity, four months had not satisfied the demand. While over 100 locations had the privilege of hosting her visit, some for only a few hours, there were well over one thousand requests.

In January, 2000, her U.S. visit ended in Honolulu, Hawaii, as she continued on to Asia.