... Incorruptibles – The factual content in this site is remarkable and arguably the most compelling found anywhere on the web ... the most complete collection of print–quality and one–of–a–kind photos of incorruptible saints including Bernadette of Lourdes, Catherine Labouré, and many more ! 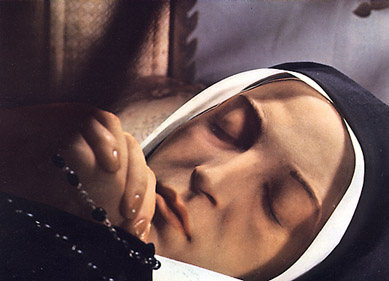 "Catholic Pilgrims of Mary and Jesus" is devoted to collecting and sharing the most remarkable and irrefutable events and truths of the Catholic tradition. The factual content is arguably among the most compelling found anywhere on the Web.  It's wealth of information and images, mostly from private sources, all concern various modes of Christian inspiration for our souls.  A virtual pilgrimage, you may discover within these pages the seeds of your own inspiration.After thirty years undisturbed in the tomb, Sister Marie Bernard's body was exhumed for examination. The cause for sainthood had begun. When the stone was lifted from the vault, the coffin was immediately seen. It was carried to the room prepared for it and placed on two trestles covered with a cloth. On one side was a table covered with a white cloth. The remains of Bernadette were to be placed on this table. The wooden coffin was unscrewed and the lead coffin cut open to reveal the body in a state of perfect preservation. There was not the slightest trace of an unpleasant smell. The Sisters who had buried her thirty years earlier noted only that her hands had fallen slightly to the left. The words of the surgeon and the doctor, who were under oath, speak for themselves: "The coffin was opened in the presence of the Bishop of Nevers, the mayor of the town, his principal deputy, several canons and ourselves. We noticed no smell. The body was clothed in the habit of Bernadette's order. The habit was damp. Only the face, hands and forearms were uncovered.""The head was tilted to the left. The face was dull white. The skin clung to the muscles and the muscles adhered to the bones. The eye sockets were covered by the eyelids. The brows were flat on the skin and stuck to the arches above the eyes. The lashes of the right eyelid were stuck to the skin. The nose was dilated and shrunken. The mouth was open slightly and it could be seen that the teeth were still in place. The hands, which were crossed on her breast, were perfectly preserved, as were the nails. The hands still held a rusting rosary. The veins on the forearms stood out.""Like the hands, the feet were wizened and the toenails were still intact (one of them was torn off when the corpse was washed). When the habits had been removed and the veil lifted from the head, the whole of the shriveled body could be seen, rigid and taut in every limb. It was found that the hair, which had been cut short, was stuck to the head and still attached to the skull, that the ears were in a state of perfect preservation, that the left side of the body was slightly higher than the right from the hip up. The stomach had caved in and was taut like the rest of the body. It sounded like cardboard when struck. The left knee was not as large as the right. The ribs protruded as did the muscles in the limbs.""So rigid was the body that it could be rolled over and back for washing. The lower parts of the body had turned slightly black. This seems to have been the result of the carbon of which quite large quantities were found in the coffin."